The Bronx is one of the five boroughs that make-up New York City and is the only borough that is not on an island. The Bronx is referred to, colloquially and legally as “The Bronx”. It is located northeast of Manhattan, the Bronx was estimated to have a population of 1,373,659 residents on July 1, 2007 by the US Census Bureau. It ranks 4th of the 5 boroughs in population and area, and 3rd in density. The Bronx is also known as, “The BX”, “The Boogie Down Bronx”, “Uptown”, and “Hip Hop’s Home”.

The native Siwanoy band of Lenape called the Bronx Rananchqua. Other native Americans knew the Bronx as Keskeskeck. The first recorded European settler to see The Bronx was Henry Hudson in 1609. He sailed up the Hudson River exploring for the Dutch East India Company. However, the first recorded settler in the area was a Dutch sea-captain name Jonas Bronck in 1639. He settled along the Harlem River area, which is today known as the Mott Haven neighborhood of the Bronx. Joining him were his wife, and a few Dutch, German and Danish indentured servants. Bronck was born in Sweden around 1600 and died in 1643.

Bronck leased the land from the Dutch West India Company and bought additional tracts from the local tribes. Eventually he accumulated 500 acres of land between the Harlem River and the Aquahung, which became known as Bronck’s River, or the Bronx. Dutch and English settlers referred to the area as Bronck’s Land.

The area now known as The Bronx remained quit and mainly suburban until around 1841 when railroad services ran on a regular basis between Manhattan and the Bronx.

The section now within Bronx County was originally part of Westchester County and parts of the towns Pelham, Yonkers and Eastchester. A division of Westchester in 1846 created a new town called West Farms. In 1855, the town of Morrisania was created from West Farms. The town of Kingsbridge was established within the former borders of Yonkers in 1873.

Morrisania, Kingsbridge and West Farms were annexed to the City of New York by the state legislature 1874. These were all west of the Bronx river. Before this point, NYC consisted solely of Manhattan. In 1895, the whole territory east of the Bronx River, including the village of Wakefield, the towns Westchester, Pelham and Eastchester, were annexed to the city. City Island was voted to join the city in 1896. All areas that had been annexed in 1895 and 1874 became the borough of The Bronx in 1898.

Morris High School became the first public high school in The Bronx and was opened in 1897.

By the turn of the century The Bronx was yielding to rapidly expanding urban neighborhoods and factories. The first subway connecting Manhattan to The Bronx opened in 1904. In subsequent years new subway lines opened including the Third Ave Elevated Line. The inexpensive rapid transit provided a means from hundreds of thousands of various ethnic groups to migrated from Manhattan to The Bronx. The majority of the people were Irish-Americans, Italian-Americans and Jewish-Americans. The largest of which were Jews from eastern and central Europe.

The main thoroughfare of The Bronx, the Grand Concourse was completed in 1914. By the 1920’s there was a great connection of the commercial area and the luxurious homes and apartment buildings with the Fordham Road-Grand Concourse intersection.

At the turn of the century, the quiet suburban streets and farms of The Bronx began to yield to rapidly expanding factories and urban neighborhoods. In 1914, the borough’s main thoroughfare, the Grand Concourse, was completed; it had been inspired by Paris’ great boulevard, the Champs Elysees. By the 1920s the Fordham Road-Grand Concourse intersection was a great commercial nexus and a center of tree-lined avenues, with luxurious homes and apartment buildings designed in the latest Art Deco and modernist styles.

At the end of World War I, The Bronx hosted the 1918 Worlds Fair at 177th Street and DeVoe Avenue.

The number of Bronx residents increased from 201,000 to 1,265,000 between 1900 and 1930. The influx of residents brought about the growth of restaurants, grocery stores, hardware stores, and tailors. Residents throughout the borough shopped at boutiques and department stores at an area known as the Hub at Third Ave and 149th Street. This section of the Bronx also had movie places and theaters. “Alexander’s opened a department store there in 1928 and a branch on Fordham Road in 1938, where it soon made more sales per square foot than any other department store in the nation. Eventually a section of Fordham Road eclipsed the Hub as the main shopping district. In 1929 Loew’s theater syndicate built the Paradise Theater for $4 million on the Grand Concourse immediately south of Fordham Road; it had four thousand seats and a baroque decor that included a ceiling painted dark blue to resemble a nighttime sky, with small light bulbs added to resemble stars and simulated clouds blown across the ceiling by a cloud machine.” Yankee Stadium was opened in 1923, at 161st Street and River Avenue.

During the Prohibition days (1920-33), gangs and bootleggers ran rampant in the Bronx. Irish, Italian and Polish immigrants smuggled in most of the illegal whiskey. By 1926, the Bronx was noted for its many speakeasies and high crime rate. 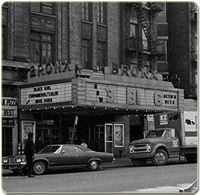 After the 1930s, the Irish immigrant population in the Bronx decreased. The German population followed was next in the 1940s, as did most Italians in the 1950s and Jews in the 1960s. The migration has left a mainly Hispanic (mostly Puerto Rican and Dominican) and African-American population.

Between the 1950s and 1960s public housing and a network of highways linking the rest of the city with the Bronx was built. Among the highways were the Bruckner Expressway, the Major Deegan Expressway, and the Cross Bronx Expressway. High-rise apartments were erected in the Castle Hill, Riverdale, Soundview and Castle Hill neighborhoods. Co-op City was built in the northeaster section of the Bronx between 1968 and 1970 and was among the largest housing developments in the word – a complex of 15,372 units that housed 60,000 residents.

In the 1950s and 1960s of public housing and a network of highways linking The Bronx with the rest of the city, among them the Major Deegan Expressway, the Cross Bronx Expressway, and the Bruckner Expressway. As commuting by automobile became more convenient, high-rise apartment buildings were erected in southern and eastern neighborhoods along the new roads, including Soundview, Castle Hill, Spuyten Duyvil, and Riverdale. Co-op City, a complex of 15,372 units built in the northeastern Bronx between 1968 and 1970, housed sixty thousand persons and was among the largest housing developments in the world. The distribution of products to the metropolitan area and the rest of the east coast became easier for industries occupying new industrial parks in The Bronx, such as those along Bathgate and Zerega avenues, and for fruit and vegetable dealers in the Hunts Point Food Market (1965).

The quality of life in the Bronx took a sharp decline during the mid-1960s to the mid-1970s. In addition to a high rate of crime and gangs, the borough was plagued by a wave of arson… the burning of buildings mostly in the South Bronx. Many landlords decided to burn their buildings in an effort to collect insurance money.

Significant residential development has occurred since the mid-1980s stimulated by the city’s “Ten-Year Housing Plan”. This in addition to the 90s job growth and a sharp reduction in crime has steadily risen the quality of life in The Bronx. Signifying its comeback from the decline of the 1970s, in 1997 the Bronx was designated an All America City by the National Civic League. The New York Times reported that “construction cranes have become the borough’s new visual metaphor, replacing the window decals of the 1980s in which pictures of potted plants and drawn curtains were placed in the windows of abandoned buildings.” Between 2002 and June 2007, 33,687 new housing units were built or were under way and $4.799 billion has been invested in new housing. In the first six months of 2007 alone 5,187 residential units were scheduled to be completed. Chains such as Target, Staples and Marshalls have opened stores in the Bronx.

* Neighborhoods In The Bronx