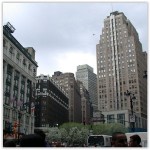 Herald Square the intersection of Broadway, Sixth Avenue (officially named Avenue of the Americas) and 34th Street in the borough of Manhattan in New York City. Named for the New York Herald, a now-defunct newspaper formerly headquartered there, it also gives its name to the surrounding area. The intersection is a typical Manhattan bow-tie square that consists of two named sections: Herald Square to the north (uptown) and Greeley Square to the south (downtown).