Riverdale (population 47,850, according to the 2000 U.S. Census) is a residential neighborhood in the northwest portion of the borough of the Bronx in New York City.

Riverdale’s ZIP codes are 10463 and 10471. While 10471 is entirely in Riverdale, 10463 also covers the adjacent neighborhoods of Kingsbridge and Marble Hill. 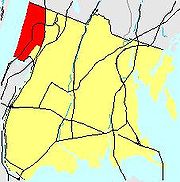 In 1974, a large residential compound and school was established in North Riverdale by the Permanent Mission of the USSR to the United Nations (now the Russian Mission to the UN) to house diplomats and their families. The 20-story building was constructed from the top down, with the upper floors built first.

Riverdale is an upper-middle class neighborhood.