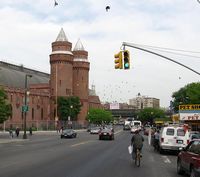 Kingsbridge is a working class residential neighborhood geographically located in the northwest Bronx, New York. The neighborhood is part of Bronx Community Board 8. Its boundaries are Van Cortlandt Park to the north, the Major Deegan Expressway to the east, West 230th Street to the south, and Irwin Avenue to the west. Broadway is the primary thoroughfare through Kingsbridge.

The neighborhood is named for The King’s Bridge, erected in 1693 by Frederick Philipse a local Lord loyal to the British Monarch. The bridge spanned the now-filled-in Spuyten Duyvil Creek, roughly south-parallel with today’s 230th Street. The Kingsbridge carried Boston Post Road, connecting continental America (today’s Bronx) with Marble Hill, once part of the Manhattan island, but still today part of the Manhattan borough. The bridge is said to still be in place, having been buried when the creekbed was filled in. The creek water flow was redirected to the new and deeper shipping canal, south of Marble Hill.

Kingsbridge was once a neighborhood of predominately Irish immigrants. From the late 1970s the Irish population has decreased significantly, being replaced by large numbers of Hispanics, Asians, Albanians and Greeks. The largest hispanic group in Kingsbridge today are Dominicans replacing the earlier Puerto Ricans and Cubans who were the first Hispanics to settle in the neighborhood in the 1970s.

The legacy of the Irish contributions can still be seen in the Roman Catholic churches and schools that serve the current residents, such as the St. John’s Roman Catholic Church on Kingsbridge Avenue near 231st Street, and its two schools; the elementary school on Godwin Terrace (just south of 231st Street), and the junior high school on Kingsbridge Avenue just a block north of 231st Street. In northern Kingsbridge the Visitation Roman Catholic Church and School is located on West 239th street. To the east, on Sedgwick Avenue tis Our Lady of Angels Church and School. For recreation Gaelic Park, (now operated by Manhattan College), is located on 240th Street & Broadway and is the venue for a variety of sports including Gaelic football and hurling. The neighborhood is also home to Manhattan College.