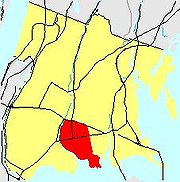 Clason Point is a collection of neighborhoods geographically located in the south central Bronx. They are Bronx River, Harding Park, Soundview-Bruckner, and Soundview. The neighborhoods are part of Bronx Community Board 9. Its boundaries, starting from the north and moving clockwise are: The Cross-Bronx Expressway to the north, White Plains Road to the east, the East River to the south, and the Bronx River to the west. Soundview Avenue is the primary thoroughfare through Clason Point. The local subway is the 6 line; operating along Westchester Avenue. Zip codes include 10472 and 10473. The area is patrolled by the 43rd Precinct located at 900 Fteley Avenue. NYCHA property in the area is patrolled by PSA 8 at 2794 Randall Avenue in the Throgs Neck section of the Bronx.

In ancient times, the Bronx River area to the West was known to the Siwanoys as “Aquahung”. The site of a large Native American settlement, comprising more than seventy dwellings, Clason Point was then known to natives as “Snakapins”, or “Land By The Two Waters”. There was a local and plentiful food source of oak acorn nuts for grinding purposes here.

In more modern times, an early English settler, Thomas Cornell, began farming here from 1654, for which the area became known as Cornell’s Neck. Clason Point was named after Isaac Clason, a Scottish merchant and a major land owner. Development in the 19th century soon attracted resort seekers and the area became known for its amusements and entertainment. From 1883-1927, it was the site of the Clason Point Military Academy.

Clason Point in the early-20th century was an era of trolley cars on the main thoroughfare, Soundview Avenue or, as it was were, Clason Point Road. Clason Point was a mixture of mansions, farmland and plenty of undeveloped fields and swampland. There were ferryboat and steamer excursions from “The Point” to downtown (Manhattan) as well as local service across the East River to College Point, Queens. The last boat to College Point terminated during World War II.

The area was then known for dance halls, roller coasters, picnic groves and baseball games, as well as the world’s largest saltwater outdoor swimming pool known as “The Inkwell”. There was a volunteer fire department, even a small airport and docks for sailboats and motorboats.

Clason Point was an area for family outings, children’s parades and, in contrast to the heavily built metropolis of today, open fields consisting of wild rabbit and pheasant.

There were also many shoreline fishing spots where fish such as porgie, flounder, striped bass and bluefish could be caught. Alternatively, there were also plenty of saloons and novelty shops.

Kane’s was a major saloon in the Clason Point area in the 1920s which featured Helen Kane, a singer who coined the phrase “Boop-oop-a-doop”. Cartoon flapper Betty Boop was modeled after her. After World War II, Kane’s became the site for the Shore Haven Beach Club, which was later the site of a housing development planned for 1,000 units. With all the amusement park rides and novelties inClason Point Park the Harding Park area of Clason Point was then known as “The Coney Island of the Bronx”.

Today the Harding Park section of Clason Point is known as “Little Puerto Rico” with narrow streets and bungalow type homes along the waterfront.